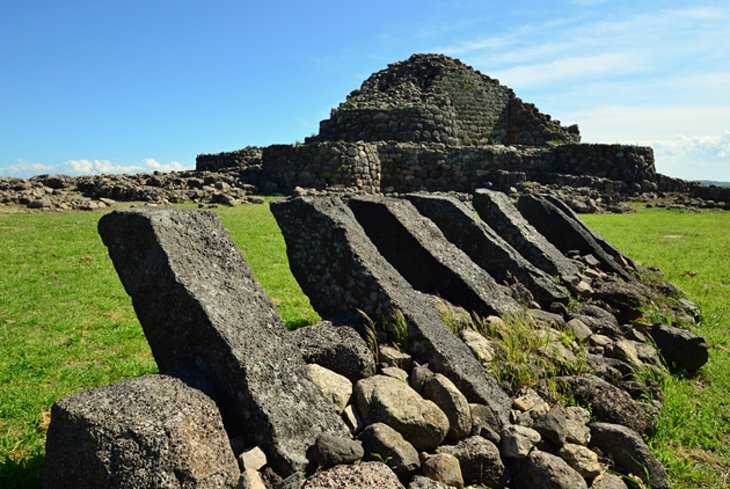 Amazing Sardinia, a must see for everyone. Clinging to the top of a steep mountain ridge, the precipitous streets of Nuoro open to views in every direction. The 19th-century cathedral of Santa Maria della Neve sits above a cliff that drops straight into the valley, and the small plaza in front of the church is almost the only level spot in town. Nuoro is a good base for exploring the surrounding Gennargentu, Sardinia’s most rugged and beautiful interior mountains, and the remote villages (Mamoiada is especially interesting), which seem barely touched by the 20th century, let alone the 21st. It’s a fascinating region, with towns clinging to steep mountainsides and local customs that still ring of the ancient past. Driving here, however, is not for the faint of heart, as roads are narrow and steep with hairpin turns over sheer drops, without railings. You can learn more about these villages and their often strange customs at the outstanding Museo Etnografico Sardo (Museum of Sardinian Traditions), which alone is worth a stopover in Nuoro. This is the island’s best collection (and brilliantly displayed) of Sardinian costume and decorative art; clothing is shown on models with jewelry and accessories worn at weddings and festivals. An entire gallery displays traditional masks. While you’re there, the National Archeological Museum has collections excavated from the Neolithic sites, as well as fossils.

Consisting of 7 major islands, Maddalena Archipelago is another Unesco World heritage (declared in 1994) of Sardinia. Its waters are clear and clean, and each year welcome snorkelling buffs in search of the unspoilt seabed of the Mediterranean. Full day or half day boat excursions are organized: they allow you to visit some small beaches and coves only reachable by boat, whose nature is still preserved and whose beauty is breathtaking. These tours usually include visits to the Island of Spargi; Budelli, where you can admire the famous pink beach; S.Maria; Caprera and finally La Maddalena. Alternatively you can rent a car on the Island of La Maddalena for an independent and adventurous tour of the local beaches. Lovers of pure and pristine sea can choose to stay at the 5-star Grand Hotel Ma&Ma, in the south-west coast of the island, at 350 meters far from the sea. Otherwise, for a more private and secluded stay, La Casitta is the right choice. Offering a familiar and attentive service, it is one of the few villas in the small island of Santa Maria. Read more about Luxury Holidays in Sardinia

Guiseppe Garibaldi was the founding father of modern Italy. He spent the last years of his life on the tiny island of Caprera, which is part of La Maddalena archipelago. His farm and house, Casa Bianca, have been transformed into a small museum where you can see the boat in which Garibaldi rowed to the mainland and his famous red shirt. This bold modern structure in the port area of Olbia houses some of the island’s most ancient history. Don’t miss the Roman era vessel which was found in the towns main port. Entrance is free, which is a nice little bonus.

The long mining history of Sardinia started probably around the 6th millennium BC, which means that mining has played an important role in the island’s history. The small village of Ingurtosu, together with the nearby Montevecchio was one of the most important mining areas of Sardinia until the mid of the last century. To prevent this region to become isolated or abandoned, UNESCO has decided to declare it World Heritage. Lots of old mining facilities have been renovated, restored, turned into a hotel (Le Dune), or are open to visit, making this region very attractive for travelers and culture-lovers trying to avoid mass-tourism.