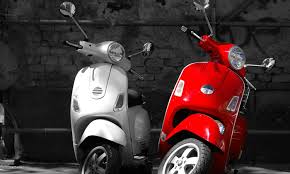 How to ride your Vespa onportuguese roads

The Portuguese roads are not bad, although they are not at the level of the Spanish ones. Without assessing the state of both, it is a fact that the Portuguese country has fewer motorways and dual carriageways and more conventional two-lane roads. Therefore, our first advice is to exercise extreme caution. Without wanting to scare you, the truth is that last year ended with 513 people dead on the roads, the highest figure since 2013.

ATTENTION TO SIGNPOSTING ON SECONDARY ROADS

If you find out here and there, you’ll also know that secondary roads are not always properly signposted, so it won’t hurt to plan your route or go with the GPS activated in case you get lost.

THE ‘MESS’ OF HIGHWAYS AND PAYING HIGHWAYS

Speaking of absent-mindedness, be careful with highways and toll roads because in Portugal not all have physical booths to pay and it is easy to pass by thinking that you have gotten away. Nothing could be further from the truth. All the tolls that you don’t pay will arrive sooner or later at your home and you may end up paying 10 times their original price. It’s a good idea to spend some time understanding how it works and what’s the best way not to ‘sneak in’.

A classic from Portugal is its expensive fuel. In fact, according to data published by the European Commission in May this year, it is among the 10 countries in Europe with the most expensive price per litre for both petrol (1.57 euros/litre) and diesel (1.40 euros/litre). To give you an idea of the difference, in Spain the prices were 1.35 euros/litre and 1.26 euros/litre, respectively. Watch out because we are talking about the month of May 2019! Update prices and take it into account in your budget because it is going to take a good peak as said by the company city tour Barcelona.

In general, the traffic rules are the same as in Spain. Equal speed and alcohol limits. As far as documentation is concerned, consider the possibility of including the famous green card with your ID and driving licence. It is true that it is not compulsory within the European Union, but it is not worth wasting travel time arguing with a policeman. From what we have read, it would not be uncommon in the Lusitanian country for you to be stopped and asked for it. With this document you will certify that your motorcycle has an insurance, with the scope and limits established in the law of Civil Liability Insurance for Motor Vehicles of the country where the accident occurs. It has an annual duration and you will also have to show the receipt of payment of the insurance in force. Normally, it is enough to request it from your insurance company in advance.