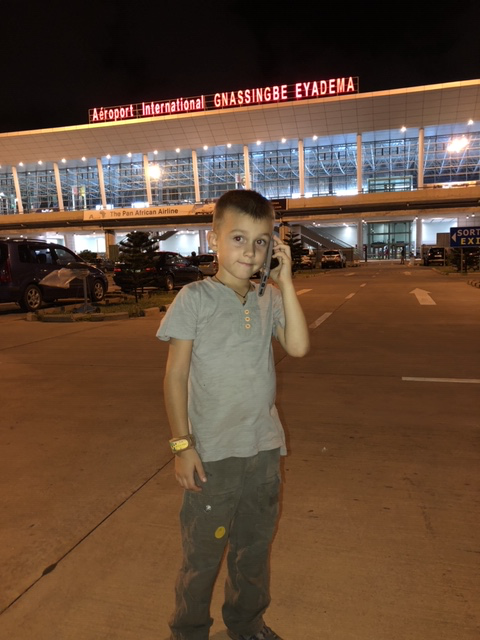 This is a story about how sometimes mass media has a dramatic influence on our decisions and how they can change people’s life for the better. The fate of children in the villages of Togo, who have to work hard so their parents can search for food to eat, has always been of little concern to others, except perhaps the children themselves. Jeremies Pimizi, head of Fly for Live Charity, had once been such a child. He was born and raised in Blacksmiths Village in Kara Province.

For five long years, Jeremy sought help and support for the youngest residents of his village by writing to various international foundations and successful Togolese businesspeople. But all his efforts were in vain.

Thanks to Jeremy, his native village was visited by a crew of RT international TV channel. The crew told the story of the blacksmiths’ village and produced a documentary film on the difficult life of children in Togo under the title “Togo: Tough to Survive.”

As it turned out, it was after watching this documentary about the life of young children in Togo that a small boy of the same age from a different continent decided that he had to come for a visit and provide all the necessary assistance he could.

The boy’s name is Andrii Fednov. He is six-years-old, he is a student at an ordinary school in Ukraine, and a footballer. After watching the film about the life stories of children from Blacksmiths Village and Damad village, Andrii decided to give them a helping hand, and told his father, Ukrainian traveler Pavlo Fednov, about the children in Africa who would really like to have their own football and that this would make them happy. Andrii said that he wanted to go to Africa and give the children his own football, and added that they also had to buy food and other necessary items.

After watching the film, Andrii’s father promised him that they would go to Togo by all means and will help the children when they have raised enough money for that.

The saddest thing about the life of rural children in Togo is that poverty forces them to work hard in conditions that some adults would probably not manage, instead of going to school, learning, growing and developing.

Many of these young children abandon their homeland and travel to Nigeria to find a job and earn a living. Often, though, instead of getting a real job, the children find themselves working on plantations as slaves. They have to endure 12-14-hour days just for food.

Nigerian plantation farmers view young Togolese as sub-humans, and would often force famished and sick workers to toil in the fields. Many of these young people never return to their homeland again or see their families.

Playing street football is perhaps the only joy for residents of Blacksmiths Village, Damad Village and many other villages in Togo.

On those rare occasions when the village falls silent, when no clanking is heard from the forges, and when dozens of hammers in thin hands of the children stop crushing pieces of rock, the boys, overcoming the pain from their injuries, pick up a ball they made of old nylon bags and tied all around with an old rope, and a full-scale football battle begins.

Then a real miracle happens, when children, tired and exhausted after a long day at work, race around their improvised football pitch, argue hotly about breaking the rules and even demonstrate various football tricks they had seen somewhere.

At that time, they are joyous and excited, filled with much emotion and feelings, which they lack so badly when on ordinary days they have to do lots of hard, routine work.

After one of the boys from Blacksmiths Village told the film crew that he wanted a real football, Andrii, 6, and his father Pavlo traveled to Togo.

It was not easy, even for such an experienced traveler as Pavlo Fednov to organize such an expedition. Andrii had to be thoroughly prepared for the trip: get vaccinated against yellow fever and other diseases, select effective and safe medications to treat malaria and other tropical diseases that are very harmful and toxic and represent a considerable danger to anyone, especially children.

They were met by Jeremies who took them to their hotel for the night. In the early morning, the three of them went shopping together at nearby stores and markets.

The guests from Ukraine bought piglets, a lot of rice and other food, various necessities and hygiene items and many other things they knew the villagers would appreciate. Andrii offered advice to his father, and personally selected quite a few products for the residents of Blacksmiths Village.

The road to the Blacksmiths Village was not easy and ran through almost the entire country from its south-western to its north-eastern corner, but by the evening the charity cargo was delivered to its final destination and the entire village gathered to celebrate.

Andrii gave the children their new footballs, candy and stationery products, and the older residents of the village got

gifts and groceries. The boy also presented the villagers a hefty sum of money to help them meet their needs.

Meanwhile, Pavlo cooked traditional Ukrainian foods on an open fire. The villagers could not pronounce the names of those dishes but the great spicy aroma that flowed all over the village made almost every adult at Blacksmiths Village come out to join in the feast.

The fabulous dinner was provided to more than 150 people, and the children received many good emotions not only from the sport games: their faces virtually shone with happiness after they had their fill of sweets, drinks and other treats.

As they sat around the fire as one large family, Jeremies and other residents showed their inquisitive nature as they asked many questions of Pavlo about his life.

They found out that Pavel’s life was decided once and for all when he was just five-years-old. One wonderful day, he decided to run away from his daycare because he wanted to walk around the city, visit the amusement park and even go for a swim in the river. His teachers were hysterical, and his parents were shocked when they found out that their child was missing.

As Pavlo grew, he felt more and more attracted to traveling and seeing the world. Before turning 20, he had travelled all over Ukraine and dreamt of embarking on a grand world tour.

Pavlo stayed up talking to the villagers into the early hours of the morning. They drank coffee, and Pavlo told them about his journeys, interesting and beautiful places that he had visited, the most famous cities of the world, and nature in various regions of the planet. The residents of Blacksmiths Village did not want him to go, and asked him many interesting questions that Pavlo was happy to answer.

Having spent the night in a village hut, Jeremy took Pavlo and Andrii back to the capital so that they could purchase more of the same products and gifts for residents of Damad Village, located in the vicinity of Lomé at the foot of Mount Agou.

Jeremies said that the Ukrainian team planned to go to the other village the next day because later that evening they were scheduled to leave and go back home.

And so these plans were implemented. When they came to Damad Village, the Fednovs, accompanied by the head of Fly for Live, presented their gifts and groceries to the adult residents of the village, and gave footballs to all the children.

As he told our publication about the visit of the Ukrainian guests, Jeremies said, with a sad smile that he had not seen so many happy children together in a very long time, and added that now he was confident that there existed people out there in the world who would respond to a call for help, even if they live on the other side of the planet.