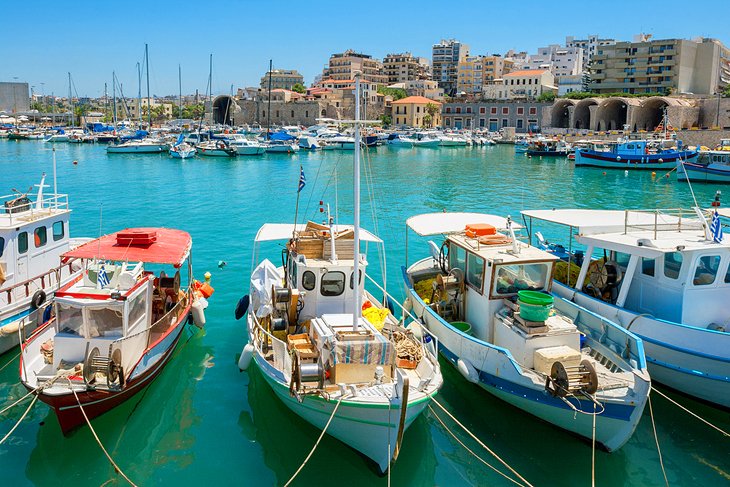 As you wander around Crete (and Greece for that matter), you’ll no doubt come across tales of the ancient Gods, their duties, lives, and origins. Considered the most important Greek god, Zeus was the god of the sky, thunder, and the king of all other gods and men. It’s in Diktaion Cave that this famous god was brought forth for all humanity. Legends aside, the Diktaion Cave is considered one of the best of the 4,500 caves and sinkholes found throughout Crete. Its cool environs are a pleasant escape from the sun and heat of the Crete. You’ll pass through five antechambers as you make your way down deep into the earth. At the bottom of the cave is a glass-calm lake surrounded by immense stalactites and stalagmites. Across the lake in a small chamber is the area where Zeus was apparently born. Diktaion Cave is located up on the Lasithi plateau, an area quite unlike the rest of Crete. This high area is mostly flat and is the breadbasket of the island, with orchards and extensive farms. Stop in a small village and grab a lunch consisting of the fresh, local produce capped off with a cold beverage.

Just a few kilometres off of the National Road, between the cities of Rethymno and Chania, is Lake Kournas, the only freshwater lake in Crete. Flanked at one end by tree-cloaked mountains, and at the other by white-sand beaches, this startlingly blue body of water is dotted with birds and ducks. Bring your cossies for a swim and snorkel, or rent a pedalo from one of the beachside vendors to explore the lake. The largest of its kind in Europe, Samariá Gorge starts from the mountain village of Omalos and carves its way through the countryside to the seaside village of Agia Roumeli. It takes about five to seven hours to complete the 16km (10mi) hike, but don’t worry, it’s downhill all the way. You’ll want to bring plenty of water and snacks, and your swimming things for cooling off in the sea when you finally reach the end.

Spinalonga is an island fortress on the southwestern entrance to the Gulf of Elounda. It used to be part of the nearby Peninsula Spinalonga, however in 1526, the Venetians cut a canal through it to separate the two. The island was also fortified and, for many years, was the first line of defense for Elounda. From 1903 to 1957, Spinalonga, was used as a leper colony for people from all over Greece who were suffering from the disease. Today, Spinalonga is just a short boat ride away from both Elounda and Agios Nikolaos and is popular with tourists, who come to the island to see the remnants of the abandoned leper colony, the fortress and numerous old structures. However, visits to this island are limited to a few hours, as there are no accommodations on Spinalonga.

Chania is the main town in Western Crete, and was the capital of the island until 1971 when it moved to Heraklion. Overlooking the Aegean Sea and backed by the White Mountains, which are snow-capped in winter, the old town’s appearance dates from the centuries spent under Venice (1204-1645). Chania is a lovely place to explore on foot. A warren of romantic alleys with pastel-colored buildings enclosed within the remains of 16th-century defensive walls, the town extends to a pretty fishing harbor. The Municipal Market, built in 1911, is worth a look for its fresh seasonal produce and gifts such as Cretan cheese and honey. Chania has an airport (12 kilometers northeast of town on Akrotíri peninsula) and is served by regular ferries from Athens’ port, Piraeus. It makes a good base for visiting the beaches of Elafonissi and Balos, and hiking the Samaria Gorge. Find more information on chaniacar.com.