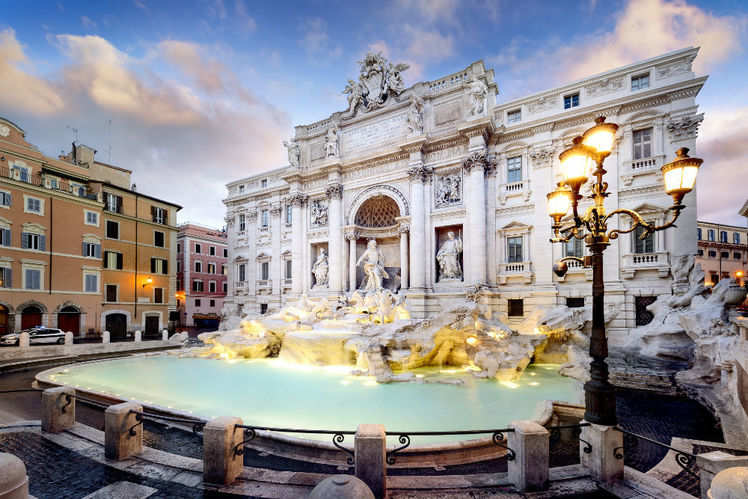 Top places to see in Rome

San Giovanni in Laterano (St. John Lateran) is one of four major basilicas in Rome. Dedicated to John the Baptist and John the Evangelist, it is the home cathedral for both the archbishop of Rome and the pope. It is believed to be the first Catholic church built in Rome. Its exterior doesn’t seem as ornate as other churches, but inside it’s beautiful decorated, with wall ornaments, columns, mosaics and paintings.

The Catacombs of San Callisto (St. Calixtus) and San Sebastiano, both underground burial places in the Via Appia Antica, are extensive – San Callista fills an area of 300 by 400 meters — with intricate multi-layered networks of passages and chambers carved into the soft tufa. In addition to the tombs, St. Calixtus has six sacramental chapels, constructed between 290 and 310, with both pagan and early Christian wall paintings.

In the Papal Crypt are the tombs of most of the martyred Popes of the third century identified by Greek inscriptions. San Sebastiano, one of Rome’s seven pilgrimage churches, was built in the fourth century on the site of old cemeteries and catacombs that, along with the foundations of a Constantinian basilica, can be explored.

Tomb chambers are on several levels with fine paintings, stucco decoration, and inscriptions dating to the first century AD. Although venerated remains are thought to have been brought here for safekeeping during persecutions, these were cemeteries, not hiding places for Christians.

Baths of Caracalla – The Baths of Caracalla, the second largest public baths in Rome, were built by Emperor Caracalla in the third century for political propaganda purposes: The emperor simply wanted people to like him. The baths were functional for over three hundred years. Negligence, looting and an earthquake turned the complex into ruins but their sheer size and ingenuity continues to impress visitors. More details about Rome Tours…

Circus Maximus, was an ancient stadium for chariot racing constructed in the 6th century. Like the Colosseum, it was used for games and gladiator fights and was one of the city’s most important public spaces. It is strategically located under the Palatine and Aventine hills and today is used for large concerts and events.

Free things to do in Rome : Go to the Vatican Museums

While the Vatican Museums usually charge, you can visit free on the last Sunday of the month from 9 a.m. to 12:30 p.m. Also free is an interesting visit under the Vatican to see the excavations and the Wednesday audience with the Pope.

The Vatican Museums contain a vast store of artworks which range from the ancient to the contemporary, including the world-famous Sistine Chapel. As you might expect, there will be lines and crowds.